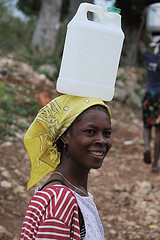 I recently returned from a 2-week medical relief trip to the country of Haiti.  You will notice that my blogs mostly describe this topic these days.  Later, I’ll collect all of the posts and give them their very own Tab at the top of the page.

The independent country of Haiti shares a caribbean island with the Dominican Republic.  Unlike its relatively wealthy and stable neighbor, Haiti is poor.  Destitute.  The poorest country in the Western Hemisphere and one of 15 poorest in the world.  Haiti suffers from high infant mortality, devastating chronic diseases, illiteracy, poor education, over population, deforestation, soil erosion, rapid urbanization, high unemployment and a weak government that grapples with violent uprisings on a regular basis.  The country has been manipulated and abused over the years by the French, the U.S., the U.N., the W.H.O. and many others.  1% of the population possesses 97% of the country’s wealth.

The group we went with is called Friends of Haiti.  If you ever wonder where you can give money that will truly help humanity, check these guys out.  Led by a catholic priest named Father Larry Canavera – but ecumenical and non-evangelical in mission – this organization provides medical care and support to numerous villages in Haiti.  The volunteer teams return to Haiti every 6 months and stay for 2 weeks.  They work principally in Thomaseau, a town about an hour NE of Port Au Prince.  During the 2 weeks, smaller teams also move out into the Haitian countryside and work in rural villages with names like Grand Boulage and Noyo.

Friends of Haiti is based in Green Bay, WI.  Our WA contingent consisted of another 3rd year family med resident like myself, one of our full-time faculty members and two part-time faculty.  The costs of my trip were largely supplanted by a $1000 grant from two different foundations associated with my hospital and clinic.

I can’t describe this experience in singular words; can’t distill it into one major theme or valuable impression.  The time I spent there wove itself around me like a dense, intricate and finely-detailed tapistry.  Dozens of times a day I found myself thinking, in the midst of a nearly-overwhelming experience, “Somehow, you need to figure out a way to describe this in words.  Somehow you have to capture all this fury and sadness, this joy and passion and fear and loss and desire and music and…this incomprehensible hope.”

These stories are my best attempt at such an impossible task.

One thought on “Haiti Musings”