I recently returned from a church Men’s Retreat in the resort town of Lenk, Switzerland. This was MY kind of ‘retreat.’ The majority of our two days was spent on the ski slopes, not talking about God and theology and right and wrong.

I’ve been a Christian since I was 8, so the pastoral lectures and Bible verses never feel especially new to me.

I routinely enjoy the music, and in our case a great band led those times in the evenings, but I was happy to attend a retreat that was mostly just a cheap ski vacation. I met some cool guys, got a little better on a snowboard, and stood in absolute awe at some of the most beautiful scenery I have ever known.

I don’t worship God very well through study, or through listening to lectures from pastors. Lectures, ever, haven’t worked well with my brain. Ask any teacher of mine all the way back to 1st grade and you’ll probably get some version of the same mildly exasperated half-smile, and a reply along the lines of, “he really, really TRIED to give a crap.”

But when I’m in the shadow of the Swiss Alps, with 1,000 year old glaciers clinging to jagged sawtooth ridges in a 300-degree ring all around me, I pay attention. Somehow, breathing in crystal-pure air, with rolling forests and organic dairy farms dotting the countryside in every direction far below me, I have no problem thinking about God and wondering how I couldn’t possibly be closer to His almighty Spirit for that moment.

So, it was a spiritual time for me, but with very little preaching or Bible-studying. Perfect.

I was also struck by the unity and beauty of the towns we passed through on our way to Lenk. Switzerland has been highly resistant to change over the years, from what little I’ve read of the country. It is fairly hard to immigrate there, and once you ARE there, good luck building consensus around any particular idea or religious creed that departs from the time-honored ways of the Swiss. Du willst ein Minaret? Das wird nie passieren!

In Switzerland, you know you are in Switzerland. Especially in the countryside. The buildings are stirringly beautiful, most made of a light-colored wood sometimes set on dazzling white painted rock or concrete bases. The barns looks related to the houses. Everything is clean, ordered, pristine.

This unity isn’t by accident. But it takes enormous force of will to maintain a cultural identity in an increasingly pluralistic and mobile society. To do so inevitably becomes political, with increasingly volatile arguments on either side.

My homeland, America, has never really had a unity of culture and history to this degree. We’re a nation of very few subjugated natives, and very very many immigrants. To walk through my country – or any large American city – is to walk around the world.

Both have their merits (except for our treatment of the natives). But there’s something so deeply peaceful about meandering through a place that knows itself so well. A place that is OLD, and has not forgotten the value of of old things. King Solomon was rewarded by God with power and money because when God offered to give Solomon anything he wanted, the young man asked for wisdom. Any place that honors age, honors wisdom, and God seems to have blessed the Swiss accordingly.

I’m not saying Switzerland is paradise or utopia. There are problems. But they’re getting lots of things right. Here, walking is revered over driving. Food is valued for quality and purity rather than quick access or cost.The country has some of the best health care access in the world, with 3.6 doctors and 10.7 nurses per 1000 people. Life expectancy is around 73 years old. Obesity is less than 8% (it’s almost 50% in the U.S.), and it is estimated that 100% of the population has access to clean drinking water and sanitation facilities.

As a Caucasian from the American suburbs, with no knowledge of my heritage further back than my grandparents, this place holds an impossible appeal for me. I don’t know my family history, whether a story of thieves or kings. My nation’s history doesn’t even span 300 years.

As our retreat drew to a close, I knew I could never truly be a part of a place like Lenk, Switzerland. I could only marvel and yearn, watching that priceless world slip past my car window, as we hurried home.

Here’s a follow-up to the case about the twisted knee (read about it here, if you want the background):

Options for treating and working up the guy’s knee included simple stuff like rest, ice and a knee immobilizer. Additionally, my fantabulous American health care system gave me the options of providing the pt with a CT or MRI, Xray and/or referral to a orthopedic specialist. I also could have mentioned that skiing and any other sport involving coordination + velocity should be bypassed from that moment forward.

I picked R-I-C-E, first and foremost. R-est, I-ce, C-ompression and E-levation tend to cover a multitude of musculoskeletal injuries. I put a knee-immobilizer on his leg, which really does little for the joint other than force it to stay still, which leads to much less pain, which leads to less involuntary muscle flexion, which might help healing but helps the pain for sure. Finally, I prescribed clinical-strength anti-inflammatories. I did not get imaging or send him to a surgeon.

It has been about a week now, and he is doing reasonably well. It will be a long time until he forgets to think about his knee when he is doing any sport. He may never have perfect use of his knee, although I still expect a full recovery at this time.

MRI is considered the gold-standard for knee (and joint) injury. But a good physical exam by a real smart doc (jury’s out on me) is statistically just as likely to identify joint pathology. When I started med school, this ohooollldd doc gave us a lecture on the physical exam. I can see why they picked this guy for the lecture because he stood up there growling for an hour about how he could diagnose pathology just as well as these “young docs who don’t know nuthin’ except for how to order more technology.”

“You can learn all you need to know just from the physical exam.” He said often, before falling asleep and asynclitically engaging his coffee cup.

His dictum is less true when it comes to detecting early cancers, etc., but he is right to some extent. We use more imaging than we need to, and it contributes in a small way to the higher cost of medical care in America. This patient is recovering as fast as can be expected (that is to say, sloooww) under the circumstances. He probably wouldn’t heal any faster with surgical intervention, either. He just needs to wait it out.

And I hope he keeps skiing.

Below is a case I saw recently that challenged me. You be the doc and tell me what you would do. In a few days I’ll describe the plan I settled on with my patient:

The Story: Young man, approximately 30 years old. Exercises regularly, in very good shape. Recently was skiing and tried to swerve. His left ski continued in the same line but his body and the other ski turned more than 90 degrees to the right. Before he could right himself, he heard an audible “pop” in his left knee, and then he crashed (I asked if the wipe out was at least cool…he said no, it was slow and goofy. He was barely moving). When he tried to get up, he felt excruciating pain in his knee and throughout his whole leg. He was barely able to get down the hill and could hardly walk to the car. Conveniently, someone else was driving home.

He came to see me on crutches, nearly incapable of putting weight on the knee. The accident happened approximately 24 hours prior to seeing me. He said the knee did not swell dramatically and that some motions hurt intensely and others weren’t so bad. 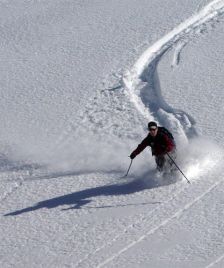 The Exam: The knee looked almost totally normal compared to the right one. I couldn’t see any swelling and couldn’t make fluid waves by bunching up the skin and tapping on it. The lateral (outside) and medial (inside) edges of the joint were not painful to pushing. The patella (kneecap) and the ligament that holds it in place were aligned well and not tender. There was no laxity in the tendons and I couldn’t push the lower leg in and out (called the drawer sign).

However, determined to cause him massive pain in some way, I succeeded by holding his foot at the sole with his leg extended and twisting like I was turning a faucet. The pain was so bad he broke into a sweat, got out of breath, and gave me a seriously murderous look. The pain was equally bad rotating the other direction. Most other motions of the joint did not cause pain but there was some stiffness.

The Choices: Here are some of the things I considered for a plan:

A.) MRI
B.) R-I-C-E. This is the acronym for Rest, Ice, Compression, Elevation
C.) Knee immobilizer
D.) Xray
E.) Referral to orthopedics for eval and probable surgery
F.) Narcotic pain meds + B
G.) Non-narcotic pain meds + B
H.) All of the above
I.) Tell him to learn to ski better and not be such a clutz (KIDDING, kidding, didn’t really think this about the guy…I’ve bailed like an idiot more times that I can count on my surfboard)