Here’s a sure way to get sued:

TPA is a pretty cool drug because it is the only one that actually breaks up blood clots. Effectively Drain-O for the body, TPA drills through plugs holding blood from crucial areas of the brain. Ostensibly, it could be used for clots in other areas like the heart and the legs, but it usually isn’t. In fact, there are EXTREMELY strict guidelines for exactly when to prescribe the drug. Roughly, those rules claim that you can only use it within about 3 hours after a person exhibits classic symptoms of a stroke. An ischemic stroke, by the way, not a hemorrhagic one.

Why so many rules? Wouldn’t a drug like that be the answer to the world’s medical problems? Think of how many people die every day because of clots forming in our vasculature that shouldn’t be there. This is why docs are so obsessed with cholesterol, for example. It contributes to clogging up coronary arteries. Arteries get blocked, heart muscle doesn’t get oxygen…heart attack. Pretty simple, really. So this drug should save the world. Maybe we should all take it on a regular basis, just to keep things thinned out.

The problem is that the drug works incompletely. It does, in fact, break up clots, but sorta like a photon torpedo from the Star Trek Enterprise would break it up (it must be quite cool to watch). You end up with bujillions of little clots in your blood stream. If they’re small enough, they will pass through even the smallest capillaries and not clog anything up. But usually, all those clots will lodge somewhere else and cause more problems…like mini-strokes, mini-heart attacks etc.

But the legal problem with the drug is that approximately 1 in 100 patients will end up with a brain bleed as a result of the drug. The reason is because after a clot forms, holes open up in the artery downstream from the clot as things dry up. The holes are basically caused by shrinkage like anything shrinks after it dries out. Then the TPA comes along and busts up the clot. Blood starts flowing again, and viola! it rushes across the newly-formed holes and pours into the brain.

“My doc gave me a hemorrhagic stroke.” Defend THAT mister docta man.

There is no incentive in our system to NOT bring litigation against doctors or anyone else. Sure, most lawyers don’t want to waste their time, but when there is a basic complaint as glaring as “my doctor caused my brain to bleed”, most will give it a whirl. Think about it: Plaintiff attorneys have a 50-50 chance of winning on the basic charge alone. Some poor patient gets on the witness stand, drooling and drooping and describing what their life was like before Dr. Flamethrower over there pasted him with that terrible medicine. But even if the case loses, most lawyers make money. Bringing charges…brings charges. Trial lawyers bring cases with big pay off potential (most stroke cases fit this bill), settlement potential, or when the patient can pay up-front.

I think there should be a litigation approval process where complaints can’t be filed unless approved by a board of medical professionals. The proper use of TPA should never lead to litigation – bleeding or otherwise, if the risks of using it are described to the patient, or the patient’s family if the patient is incapacitated.  In many situations, TPA is the patient’s only hope of salvaging some brain tissue.

But this isn’t how things work in this country. A person can sue for any reason – rational or not, understandable or not. Fortunately for me, family docs don’t often use TPA. Use of the drug is left to ER docs and neurologists. With this kind of involvement of the un-trained legal profession in the medical world however, more and more docs of all specialties are taking a hard look at that 100th patient who could use TPA. Statistically, the lawsuit is virtually assured.

Thanks to all who dropped by over the past few days. My latest post about apologizing in medicine caused a more than 300% increase in hits to the blog. That particular post was listed at #24 on the WordPress Blog of the Day list as well. The coolest part about that was seeing my wave avatar – the greatest avatar of all time – in line between some guy’s face and a picture of handcuffs! Anyway, I seem to have hit a nerve.

Although not the only thing I think about in my job, I will continue this line of thought with a little (true) story: 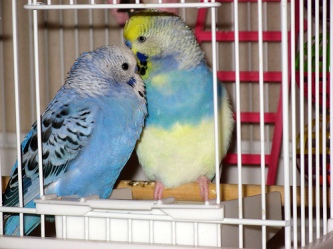 I had a friend in high school who had two pet parakeets. They seemed like they were pretty close pals in their cage – snuggling together at night, chirping at each other…you know, parakeet stuff. When my friend (let’s call her “Beth”) woke up to find one of the parakeets droopy and sick-looking, she quickly put him/her into a little shoe box and whisked it to the nearest veternarian to get checked out.

The vet, who no doubt had many years of education behind him, probably didn’t see many vaguely ill parakeets. Be that as it may, his “physical exam” didn’t go so well. In the course of pushing on one part of the bird, my friend hear a distant *snump*, and suddenly the bird’s head pointed in an acute angle from the body. In short order, the bird went completely limp. The sweet little parakeet – singer of songs, snuggler of partner parakeets – now dead at the hands of the medical professional entrusted to it. The vet looked up to what I’m sure qualified as highly uncomfortable stares of reproach and surprise. Beth was too shocked to much more than mutter, “Oh my god, you just killed my bird.”

“Uh..,” He searched around the exam room. Reaching into a drawer, he pulled out a brown paper lunch sack, dropped the corpse into it, rolled up the top and handed it to Beth’s mom. “That’ll be no charge,” He said, subdued. “Sorry about that.”

So my friend went home with her bird that may very well have died anyway, but now was dead for certain. And from a broken neck, not some mysterious infection. She showed the carcass to her other bird, who let out a warble of what any human raised on a steady diet of Disney anthropomorphisms for a decade could only interpret as the parakeet version of rending garments and gnashing teeth (or beak) in abject sorrow. Furthermore, she thenceforth enjoyed her surviving bird very little at all. It quit singing and became rather “pecky”. It also began masturbating an average of 5 times a day, which altogether made for a rather dispiriting pet, especially when there was company (they had to hide the hapless, undersexed avian in the closet).

So, the vet messed up. But imagine if after dropping the bird unceremoniously into the paper bag, he had unabashedly walked out to his front desk and filled out a bill for a typical visit. “Sorry about killing your bird. That’ll be 80 bucks. Cash or credit?”

In my mind, if you make a mistake in good faith, you should apologize and then try to make things right between you and the person who has been harmed. This entirely justified premise, I think, led to the birth of medical litigation. But this perceived need for litigation came about because of hospitals themselves. Just a few days ago, it was announced with some fanfare, that hospitals here in the Pacific Northwest, would “tear up” bills to patients who endured medical mistakes. They just decided to employ this policy? After 30 years of catastrophic, irrational and flagrantly craven medical litigation, they’re just starting to do this? Can you imagine going to the hospital and leaving with the wrong leg amputated…and then getting a $26,000 bill for the procedure? Until recently, this was actually pretty common. No wonder people got the courts involved!

Hospitals provide free care to homeless and destitute – largely through their ER where they can’t turn people away – on a regular basis. My hospital gives away over a million dollars in care every year. They write it off as charity care and the government gives them a break on their taxes for it. They have a budget for this already. There is absolutely no reason why they can’t designate some patients as qualified for free care for certain problems caused by the hospital staff. No, some guy can’t have monthly chest CT’s because a hangnail got infected while walking across the parking lot to pick up 80 cartons of Virginia Slims. But any continuing care associated with a medical mistake should be free.

Imagine a patient and family being seated in a nice conference room. In attendance are the top administrators of the hospital, the lead doctors and nurses and anyone else heavily involved in his/her case. The doctor then verbally apologizes for a serious mistake that was made even though the entire team had the best intentions. S/he can describe what led up to the mistake and explain how it actually occurred. Then there is an explanation of what is being done to try to protect others from a similar situation. After the doctor is done, the hospital C.E.O. can then tell the patient that all care related to that mistake will be covered by the hospital. Forever. It’s taken care of. Then, the patient and family gets to say talk. They can say anything they want – to the doctor, the nurses and staff on their case, or the administration. This is their chance to rant, to bitch, to tell off the medical team if they want to. They can get everything off their chest and ask any questions they have. They can make recommendations and requests.

I believe that a hospital (and individual clinic) process like this would nearly eliminate high-payout medical litigation. With one other major additional change: Cases should NEVER result in financial independence for the plaintiff. Courts should be used help find blame when the patient and the hospital/doctor disagree. If it is found that the doctor is to blame, then the doc and the institution should be required to provide any related care for as long as necessary. Multi-million dollar payouts, by contrast, provide too much incentive to win the case for Machiavellian reasons. Suddenly, instead of just trying to figure out who is to blame, people are trying to prove incompetence, denigrating character and reputations and flat-out excoriating one another. This system is why I’ll never trust John Edwards, who lives in 26 THOUSAND square feet of house, but professes to care so much for poor people.

It’s easy to say this whole tort system is about the patients harmed, about justice. But as the system is set up, it’s mostly about the money. Lawyers and too many patients get involved with medical litigation to make themselves rich. They should be getting involved to make things right. There’s a big difference.